“Are you sure you want to do this?” was the only utterance, phrased as a question, my mother could evoke moments after I informed her I was moving to Costa Rica. On that day, in the spring of 2010, I assured her that I would only be gone for six months with the rationale of finding myself, escaping winter, and fulfilling study abroad experiences that had up until then eluded me. Almost four years later, I returned to Canada for good. 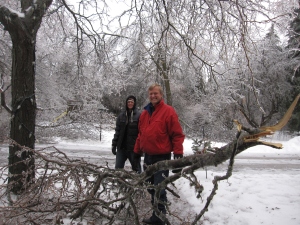 The ice storm was a nice welcome back, three days after arrival.

375 days ago I arrived in Toronto, severely hung-over and sunburnt, without a plan or idea of what the future might entail. I wrote at the time that coming back to Canada was as much a move abroad as leaving was, and the parallels, over a year later, have proven that to be true.

I arrived in both places unemployed, but managed to find teaching jobs soon after arrival, with Inlingua and ILAC, respectively; cultural adaptation and networking proved to be essential on both ventures, almost moreso in Toronto, where the job market is fierce and time away leads to a more idealistic paradigm portrayal, rather than realistic; and, perhaps most fascinating, after one year’s time in both places I wanted to stay longer.

I think I told my family on three separate occasions that I was moving back to Canada without following through on it. In year two and three it had to do with promotions at work and career progression, but after year one it was purely about personal growth; I hadn’t done all I needed to do in Costa Rica, and needed much more time to accomplish those things. After one year now under my belt in Toronto, I eerily feel almost exactly the same way.

I have an awesome job that I love; I meet new and cool people from around the world on a daily basis; rarely does a week pass where I don’t learn of a new neighbourhood, or eat at restaurant I haven’t before. In essence, I am just now starting to feel settled.

Some of the amazing people I’m privileged to teach.

Settled has always been a word that I’ve considered super-close to complacent, a word I heavily resent. However, the settled I feel now is nowhere near resentment, but damn-near close to happy. I love Canada and am thrilled to be back. Being here again reminds me of the great things it offers and many of the reasons I grew frustrated living in the third world. Chasing off complacency, though, means changing — sort of.

This time of year lends itself to a plethora of false promises, mostly to ourselves. It’s pretty well documented that I hate New Year’s Eve and the reasons are two-fold: one, the celebratory aspect almost always disappoints. Two, I’m also not much for telling the world I’m going to do something, simply because the calendar is changing, and then quit three weeks later.

Nevertheless, I think having goals — or, at the very least, measurable aims — should infinitely be on everyone’s daily agenda, regardless of the time of year. With that in mind, I’ve come up with a few things that I value, both new and old, that I wish to either incorporate or re-incorporate into my life as I hit the one year mark:

Not included on the list, but an equally important component is my quarterly 21-day no alcohol quests.  This one started on Boxing Day and Day 2 has already bore many of these fruits: I’m writing again; I studied a little French this morning; I’ve traveled outside the city to visit my brother in Muskoka; and I’ve messaged a friend from Costa Rica, in Spanish, of course. None of these things are drastic, but are all essential parts of the whole. I will drink again (I’m cleansing, not quitting) but I already feel better. The last time I did a 21 day-er, I felt invigorated and re-energized, and I am excited to feel the same this time.

Drinking on New Year’s Eve? I’ll be the guy with coffee in the bar, thank you.

I learned long ago from a really good friend that there will always be a reason to do something; it’s up to you to decide not to do it. On the way to Montreal, that same friend and I were discussing our lives and the need to have a “home base.” We’ve both lived outside of Canada for extended periods of time and, thus, can now cherish what our home nation offers. Toronto has the same name, but is in no way the same city that I left almost five years ago. She will, thankfully, keep evolving; I need to ensure I do the same.