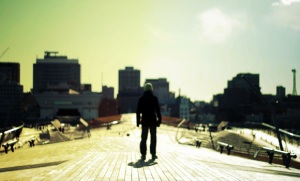 Though I’ve been back numerous times in my three and a half year absence from living in Canada, those visits differed greatly from this one. Every other visit had a specific end date; I always had a ticket back to Costa Rica. This time I don’t. That’s not to say that I’m back in Toronto indefinitely – that isn’t true – but I don’t have any definite plans to leave. This changes things considerably.

I’ve written about this before, but it’s worth noting again. When you visit home on a temporary basis, you never escape vacation mode. There’s a hard beginning, and a hard end. You know how much time you have, and hope to accomplish as much as you can within that time frame. If you don’t do one or two things, or miss out on seeing a few friends, you know you’ll catch them next time. Not the end of the world.

Similarly, you don’t pay too much attention to the aspects of life at home that are polar opposite to those in your adopted one. That is, you note the differences, but don’t give it much thought as you know you don’t have to deal with them for more than ten days to two weeks at a time. You never have to exit the vacation bubble.

This time, consider that bubble popped.

With only a few weeks of temporarily-permanently being back in Canada, I’ve already experienced much of what I knew I would, but also knew I couldn’t prepare for: considerable reverse culture shock.

It’s something I talked about a lot with my friends in Costa Rica, as well as others who had lived abroad previously, in my final months living in Central America. It’s a bit of a funny concept, because even if you are cognizant of the differences, it doesn’t mean they are easy to adjust to.

Cold weather and ice storms, even though on my list of least favorite things, are not what I’m referring to. Those are certainly part of living in Canada, but I don’t consider them to be part of Canadian culture. Just like beaches and warm weather are perks of living in Costa Rica, you’d be hard pressed to find a Tico that would personally identify with them.

Cultural differences lie in how people live their lives and, within that, what is valued. This is where the greatest difference lies between my now two permanently adopted worlds – and where the culture shock is really taking its toll.

The biggest distinction between North American and Latin culture is not about what people do but when they do it. Life in Latin America is much slower. Things take longer. People are more relaxed and worry less. This is not to insinuate that people take their work less seriously – that would definitely be false – but to state that there is a greater focus on life outside of work. Let life come to you and be sure to enjoy all aspects of it while you wait.

In Canada, everything goes one hundred miles an hour. Emphasis is on work and if you have time to do other things after that, that’s considered a bonus. This mentality naturally trickles down to other aspects of life, which makes people anxious and a feeling that there’s always something to do. Beautiful subtleties can easily be lost in the bustle.

I’m not sure if one is better than the other; they’re just different. Just like I was frustrated in my first months in Costa Rica for those same reasons, I feel myself a little frustrated now knowing that I don’t have my vacation bubble to save me.

Sometimes living abroad sneaks up on you. Similar to not knowing you’ve put on twenty pounds until someone quietly pulls you aside and tells you, you don’t necessarily realize how much you’ve adapted your own life until you take yourself out of that environment. Even when you know it’s coming, it takes a lot of getting used to.