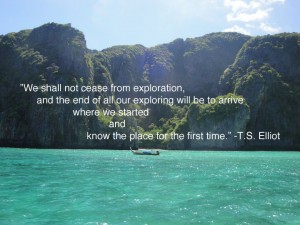 I’m used to buying plane tickets. When you live abroad, visits home at least once a year are usually requisite. This is doubly true in my case. I spent an entire twelve months in Costa Rica when I first arrived, almost to the day, before I went back home. After that, I’ve made the trip roughly every six months. Always at Christmas – as per mom’s orders – and then once to enjoy the (normally) gorgeous Ontario summers.

So when I sat down this week to buy yet another plane ticket, nothing felt weird about it – until Expedia kindly asked me to specify a return date. I didn’t have one. Err, I don’t have one.

I haven’t bought a one-way ticket since that first flight that brought me here to Costa Rica. As it dawned on me that I won’t be coming back this time, I unexpectedly felt many similar emotions and thoughts that first occurred to me on my last one-way adventure; feelings that I haven’t really felt in the last three years. That sense of an unknown entity.  Not knowing what exactly the next step is or what it’s going to be like when you arrive at your destination.

That last point may seem bizarre – and it does to me too – as my destination in this instance was my home for the first 22 years of my life. But it’s also the same place that I haven’t called home in almost three and a half years. I’m not sure that I have ever experienced the phenomenon of reverse culture shock, but I know that I surely will.

Two week visits every six months don’t count as returning home. That’s just enough time to catch-up with family and friends, enjoy some evenings out, share stories about your ongoing adventure in that far-off mystical land, and then get back on a plane. Lather, rinse, repeat every six months.

The irony of those trips home is that they are literally those – trips home. You stay with your parents, or someone else’s house, and enjoy your time off. In many cases friends are working, busy and only able to set aside an evening or two from their other obligations. There really is no sense of settling back in or even a semblance of nostalgia for what it’s like to live there; it’s all a flash in the pan.

This will be different. This is not a vacation. This is another move abroad. While Toronto is – and always will be – home, I’m not naïve enough to think that everything will simply fall back into place once I put my first foot into a snow bank outside of Pearson. If there’s one thing that I’ve learned from my time away it’s that life doesn’t stop for anything. The lives of your family and friends don’t stop because you are away just as much as yours doesn’t stop because you’re not there.

Transition will be necessary.

This is the exciting part. This is why people make changes in their lives; to have that feeling of not knowing. As I bought my ticket this week, all my feelings of excitement, anxiety, and outright fear that I felt in the days and weeks leading up to my venture to Costa Rica returned. Soon after, I realized – though not quite to the same extent – that I’m starting to feel similarly now.

I’m moving home, but the city is different. My family and friends are the same, but they’re different people. I know where the streets are, but I won’t recognize them. All these things are also true of me. And that’s the best part.

2 thoughts on “A one way ticket to somewhere”