“Where are my pants?” “Was her name really ‘Areola’?” “We gotta get Grose outta here.” “I think I’m going to follow through on our drunken deal to vomit on the bridge.”

And then we got on an airplane. 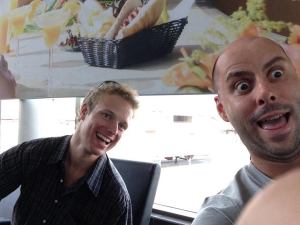 At the airport coming back. Fresh out of the ocean, and into an intense hangover.

On this day two years ago, I set foot back on Canadian soil — carrying one of the worst hangovers of my life — with the intention of staying for a while. It’s been quite a ride.

In order to look forward, it’s first necessary to look back.

I use Costa Rica as a point of reference in my life because it represents so many things of significance. It was there, after having taken a very real leap of faith, where I learned to truly be independent; it was where I had the first job that I can say was an actual job, even if it wasn’t in reality; it was where I made most of the best friends I have in my life; and, it was also the place where I grew up.

Does growing up make one a grown-up?

Jumping ahead to present day, the more things change, the more they stay the same. I still consider myself to be independent; I have a real job that, for how much I enjoy it, I don’t consider to be; I’ve made more great friends from a diverse range of backgrounds; and, I’m building on the blocks I established in Costa Rica.

So has anything changed?

The main reason I decided to pura my vida away from that tropical paradise was to pursue bigger, better opportunities. To challenge myself. To grow. Reflecting back on the past two years, I can say that I’ve done that, both personally and professionally.

In a city like Toronto, establishing yourself is no easy task. Due to the mere cost of living challenges that face anyone here, I crawled back in with mom and dad for a while, then found an apartment with a roommate before eventually settling into my own place now. Independent living: check.

Ditto work wise. Lucky enough to find a teaching job almost immediately after kicking that drinking-for-five-days-farewell-week-bananza-induced hangover, I have somehow tricked the higher powers into thinking I’m quite competent at it. So good at faking it, I’ve also curiously convinced a Toronto-based community college to hire me starting next year, something that I’m quite excited about.

Some of the people I’m privileged to work with. Circa summer, 2014.

What does all of this mean? Could be something; could be nothing.

Of all the things I learned while living in Costa Rica, the one which I promised myself to uphold upon leaving was to maintain my life outside of work as more important. Perhaps I didn’t understand the magnitude at the time, but I do now. Canada, Toronto, the first world — perhaps they’re all the same. They have a hustle and bustle about them that make your vocation the only preoccupation, and most certainly the priority. In order to be happy, it’s imperative to have work be a part of the whole, but not more.

In my maturity I have understood this, even if not having found an answer.

Life is a fickle concept. For many, its definition is inconsistent. For me, a life is a collection of experiences. Work. Friends. Travel. Relationships. Education. Change. And more. Then, repeat. I recall being in elementary school – maybe grade two or three – and perceiving the sixth graders to be the cool kids, the eighth graders to be ancient in age. Upon arriving at those respective plateaus, I didn’t, for obvious reasons, view them in the same light. I’m not sure, upon arrival, we ever feel the same way toward a new reality as we had envisioned it in fantasy.

Do these types of realizations make us more astute? What is intelligence? Does knowledge make us smart? Throughout life, our goal shouldn’t be to find answers, but to ask better questions.

This summer, some of the Tico inlinguanatti reunited in Istanbul!

Am I a real life grown-up? I have no idea. What I do know is that life doesn’t understand complacency; we must keep adding to our experiences. I went to Europe and Costa Rica this year; next year, I’m off to Mexico, Europe again, Chicago, and Kansas; I’m also starting a new job, and who knows what else 2016 has in store.

Costa Rica circa 2010 would be proud.

I have a love-hate relationship with Facebook: I hate that I love it. It’s also developed this somewhat pesky habit of reminding you of what you did on this day, chronologically, from years past. Most remind me of my immaturity and lack of experience. On this day, though, it showed me my post from exactly 730 days ago, of when I left la pura vida. I read it. And I smiled.

This is exactly why writing is so important, and why we should all chronicle our lives in some way. I wrote about how I felt leaving and that the thing I was most grateful for was the people. My fear was that we would lose touch, as is common in such circumstances. Sitting here today, it’s pretty amazing how that has not happened – and we may even be closer today than ever. That person with whom I share the anecdote from the beginning of this epic remains one of my best friends. I look back at that story with fondness, admiration, and utter bewilderment.

Realizing this proves to myself that I’ve gotten older. But, please, don’t tell me that I’ve grown up — I don’t think I could handle it. There’s no bridge vomiting or Areola mishaps today, but, who knows: come talk to me in another 730 days. That next experience awaits.