For those wondering — and for those not wondering — yes, I am alive. This is my first post in quite some time and comes to you via a cop-out: this isn’t a real post but rather a re-post of something I’ve written for another forum. I don’t usually do this as it is both a tad egotistical and narcissistic, but I feel the end justifies those means in this case, and for that I’m willing to forfeit some dignity. More “real posts” to come soon, and why I’m getting back into writing on a more regular basis, but for now this is an article I wrote for TEFL Equity Advocates, a cause that is close to my heart.

In my time in the English as a Second Language field, I’ve met some incredible teachers, both who speak English natively and who do not. I’ve also seen many very qualified and experienced teachers not be able to find employment based on their first language not being English, an injustice that continues to dominate the industry. It is an inherent notion that the best possible person to teach a lanuage is one who speaks it as their first. However, a more poignant assessment of what classroom objectives are reveals that if a person speaks it, and understands its inner-workings, at a native level — a distinction that is often cast aside — then that individual should be equally qualified.

This viewpoint is not commonly shared on a global scale, unfortunately. The ESL industry, moreso overseas than in North America, is a distinctly prejudicial one in its hiring practices; physical appearances almost always supersede qualifications. As I argue in the article, this is the combination of an industry perpetuating the stereotype that non-native speakers can’t be as good at teaching as native speakers, and students buying into their logic.

I was invited by a good friend, Marek Kiczkowiak, who I used to work with and who is also much more qualified and a far better teacher than I, to participate in a new campaign he’s spearheading entitled TEFL Equity Advocates, and for which I wrote the piece. He is a Polish native, and is one of many to fall victim to the industry in this regard. The argument, of course, is for equality: if a teacher is good, it shouldn’t matter where they are from. Non-native teaching advocacy doesn’t mean fighting for teachers who have a poor grasp of the language; it means fighting for the ones who are clearly qualified and lose out based on pre-conceived and false notions. Some of the best teachers I’ve worked with have come from non-English speaking countries.

The goal: to have qualification and ability, and not origin, be the determining factor.

Most famous for his research into people’s tastes for spaghetti sauce in the early 1980s, Moskowitz fundamentally changed the way food companies thought about making clients happy. Two of the most famous spaghetti sauce companies, Prego and Ragu, both hired Moskowitz to fix their brands, both of which had grown financially stagnate.

At the time, the two dominant types of sauce were plain and spicy. However, after creating and offering 45 different variations of hand-made sauces he prepared for the American population, Moskowitz determined that there was a third sauce type that was deeply desired: extra-chunky. The mystery was that neither Prego nor Ragu offered an extra-chunky option.

Up to that point, both companies had operated based on the assumption that the only way to find out what people wanted was to ask them. Over a three decade span, not one person — either through a focus group, survey, data research, etc. — had ever said they preferred extra-chunky spaghetti sauce even though, as the research showed, a significant number of them actually did.

What Howard Moskowitz discovered, and what can be extrapolated across a myriad of other mediums, is that a big part of human nature is not being able to explain what we really want; rather, given an option, we statistically go with the known entity.

When I was asked by my good friend Marek Kiczkowiak to contribute to this terrific cause, Moskowitz’s analogy was the first thing to come to mind as that line of reasoning remains one of the greatest barriers still preventing equality among native and non-native language instructors. As a former Director of Studies of a language institute in Latin America, I can say with conviction that one of the largest, if not the largest, barriers still hindering non-native English speakers as teachers is that students don’t want them. Rather, students think they don’t want them.

Allow me to elaborate. Current and prospective English learners are continually told by the industry that native instruction is superior. On the surface this makes sense as who better to instruct a language than those who speak it natively? That is, until you peel back the kimono of English language instruction. What students often don’t consider, even though it may be the most obvious point of the entire discussion, is that ESL is a business. And, in my experience, the business aspect has continually fueled the circular argument that has increasingly made non-native instructors unemployable.

Schools promote native instruction because it brings in business. Students enroll at schools that offer native teachers because that same school claims native speakers are better teachers. And on goes the cycle until it becomes accepted rhetoric. 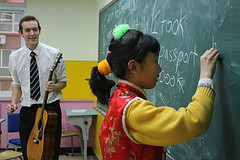 When negotiating with clients in Latin America, one of the first questions I was asked was about where our teachers were from. If it didn’t come up in the first few minutes, we would always make a point to emphasize it. Not because we were proud of the fact, but because it was a selling point. We did employ non-native instructors, but we were always forced to schedule them with caution. At a new client, a non-native teacher meant a bad first impression; for some high-profile clients, requests for native speakers would frequently flood my inbox; passports were always checked before resumes.

In the Asian market it’s even worse. English teaching jobs in South Korea are almost entirely for native speakers, and even they experience intra-cultural discrimination. If a native speaker is anything but fair skinned, their ability is also deemed inadequate because they don’t meet the physical profile (read Michael Griffin’s post about it here).

Which brings us full circle to the main point: the industry has disguised what students actually want with what they think they want.

The irony in all of this is that most, if not all, ESL learners who have experience with a non-native instructor will tell you that they had absolutely no issue with how the class was delivered. The non-native teachers that I employed experienced tremendous success not because they were personable, international, or carried good senses of humor but because they were good teachers. The other traits are no doubt also important, but students, first and foremost, inherently want a qualified teacher; any student will tell you their first priority is to learn and where their teacher is from is not of great importance.

Which helps perpetuate the incredibly important notion that nativism is certainly not synonymous with qualified — an idea that is increasingly gaining more traction globally. If students or corporate language clients had a greater awareness of how many native ESL instructors gain certification — generally in a four week crash course with little to no practical experience — they may not be so eager to take their classes. That’s not to say that inexperienced teachers shouldn’t be considered, but they shouldn’t be hired simply for being native speakers just as non-native speakers with ample experience ought not be brushed aside because they aren’t.

The answer lies in a two-pronged solution that combines heightened client awareness of what constitutes a valued learning process as well in a responsibility on the part of schools or educational institutes not to succumb to ill-founded client demands; just as no responsible doctor would allow patients to self-diagnose themselves, language institutions cannot let their clientele gauge the quality of instructors.

“That is the final, and I think most beautiful, lesson of Howard Moskowitz: that in embracing the diversity of human beings, we will find a surer way to true happiness.” This is how Gladwell closed his talk, and how I will as well. Optimism remains that a true embracement of human diversity will soon trickle into the current impasse in the language instructor debate. I’m confident that with increased exposure the quality of teachers, not the origin of their passports, will ultimately prevail.